As some of my readers may know, I play recreational hockey a couple of times per week. I’m a goaltender and at 49 years old, this is a position that is hard on the body, especially the hips because of the way the hips must rotate to play the ‘butterfly‘ style. END_OF_DOCUMENT_TOKEN_TO_BE_REPLACED

Hockey great Jean Beliveau passed away earlier this week. His reputation on the ice was of a player who was respected by fans, teammates and opponents alike. Off the ice, he had a reputation as a classy gentleman who was always willing to take the time to make the people he would meet happy. 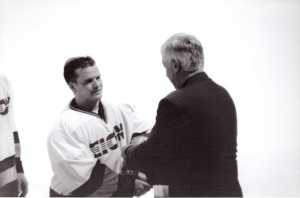 Me and Jean Beliveau

I had the pleasure of meeting him once. In 1998, I was playing goal for the Eicon Technology hockey team and Mr. Beliveau came out and coached our team during a charity game we were playing. In the brief moments when I spoke with him, he certainly lived up to his reputation. In the two hours or so that he coached our team, he made me, and I’m sure my teammates, feel like we were important to him.

I left the arena that night feeling grateful for having met the 10-time Stanley Cup champion. Plus, I was happy to show my Dad, who was a huge Canadiens fan, the picture you see on this post.

This weekend’s Napa 200 Nascar Nationwide series race at Circuit Gilles Villeneuve certainly lived up to my expectations! Justin Allgaier won the race with a last lap ‘bump & run’ pass of local favourite Jacques Villeneuve, who had led 43 laps of what was supposed to be a 72 lap race and ended up third. Villeneuve’s teammate, Sam Hornish, finished second.

In my post on prior to qualifying on Friday, I had predicted a win by Villeneuve, Hornish second, and Tagliani third. It almost happened for Villeneuve, who did an incredible job saving fuel over the last few laps. JV ran an amazing 35 laps on his final tank of fuel! The race, scheduled for 72 laps, ended up running 81 laps due to late cautions. Even the ESPN commentators, who have been fairly harsh on Villeneuve in his last few races, were giving him props for how well he managed his fuel situation, saying “if he wins today, he really deserves it.” END_OF_DOCUMENT_TOKEN_TO_BE_REPLACED

It’s that time of year again here in Montréal. The Nascar Nationwide series has arrived once again for the annual Napa Auto Parts 200 at Circuit Gilles Villeneuve.

I’m not a huge Nascar fan, but I always watch the road course races (Road America, Sonoma, Elkhart Lake, Montréal) because I find them to be more exciting than the ones on the traditional oval race tracks. The Montréal race is always an interesting one, given that the Circuit Gilles Villeneuve is such a good race track, but this weekend’s race has a couple of added storylines that should make the 2012 edition even more exciting:

Personally, I ‘m hoping that the whole Road America thing is in the past and that both Danica and JV will run a solid race. It doesn’t really help anyone if Danica takes JV out and risks damaging her own car. Keep in mind that she’s racing for points in the championship, JV isn’t. She should concentrate on her own race, and hopefully for her, she can bring her car home for a top 5 finish.

As for the Canadian contingent, I’m really hoping one of them will take the checkered flag. From this morning’s practice times, it looks like Villeneuve and Tagliani have the cars to beat.

My bold prediction for the race

Quite a good NASCAR Nationwide race earlier today at Road America in Wisconsin.

As usual, when NASCAR races on road courses, we see a lot of ‘tradin paint’, especially in the last few laps. Today’s race, ultimately won by Nelson Piquet Jr., was no exception.

On the last lap, with Picquet running away with the victory, this happened:

Here’s my take… it’s too bad for Danica, because she drove a really solid race. But, that was a pure racing incident. All three drivers, Patrick, Papis and Villeneuve are racing for position. Villeneuve clearly had the most speed going down the straight and was bumped by Papis into the grass. Both Patrick and Villeneuve were carrying too much speed into the corner and were experiencing ‘wheel hop’. I wonder if either of them could have made the corner had the contact not happened. In the end, there was contact, and it wrecked Danica’s race, but I chalk it up to being a racing incident… can’t blame Jacques on this one. (Granted, Villeneuve could have been more gracious in his post race interview)

The post-race reaction has been quite negative towards Villeneuve, which I find interesting. How is this incident any different than when Michael McDowell spun Villeneuve earlier in the race? It isn’t… but there was no negative reaction to McDowell, nor should there be. It’s racing people!

Sadly, this incident doesn’t help Villeneuve’s chances of landing a full time NASCAR ride. Too bad, like him or not, Jacques always makes races interesting.